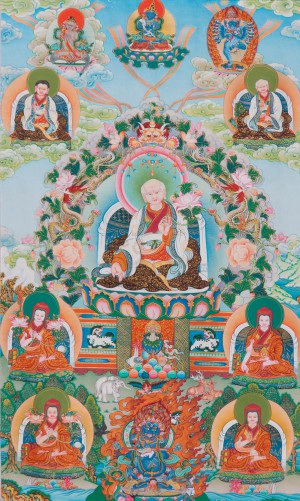 The founding Masters of the Sakya tradition

The Sakya tradition is known as the ‘holder of all the Buddha’s teachings’ due to the vast extent of teachings and practices it has preserved in its long history.

It takes its name from the monastery founded at Sakya in south-western Tibet in 1073 by Könchok Gyalpo of the Khön clan. Since his time the leadership of the tradition has remained within the same family. Könchok Gyalpo was followed by his son, Sachen Kunga Nyingpo, the first of the five ‘gongmas’ (venerable masters), who in turn was succeeded by Sonam Tsemo, Drakpa Gyaltsen, Sakya Pandita and Chogyal Phakpa, teacher of Kublai Khan. These five founding lamas gave the tradition its distinctive shape, Sakya Pandita being particularly renowned throughout Tibet and beyond for the depth of his knowledge and mastery of all the teachings. He was also instrumental in preserving the efficacy of the dharma by clarifying the misunderstandings which arose during the early history of Buddhism in Tibet. The current Sakya Trizin is directly descended from these ‘gongmas’.

The most important of the tantric transmissions that the Sakya school has preserved is the Hevajra Tantra with its associated instructions known as the Path and its Fruit, which had been developed by the 9th century Indian yogin, Virupa. Other key transmissions that form part of the Sakya teachings include the cycles of Vajrayogini, Vajrakilaya, Mahakala and Guhyasamaja. Over the centuries numerous men and women have achieved great realisation through the study and practice of the teachings preserved within the Sakya tradition.

For more information on the Sakya tradition, please visit https://hhsakyatrizin.net/the-sakya-tradition.