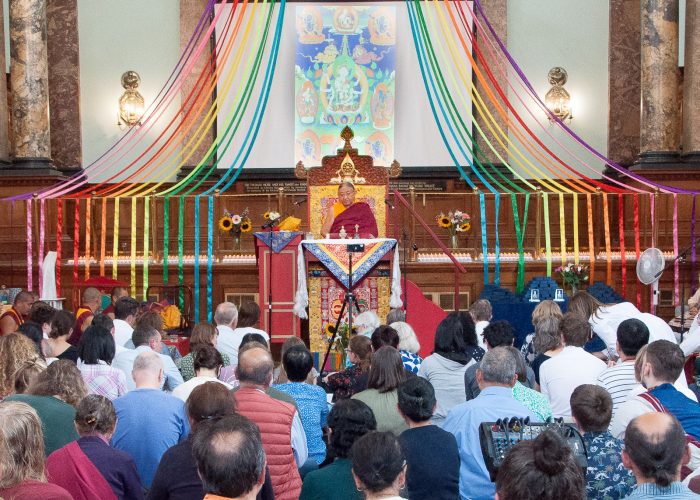 On Sunday 28 and Monday 29 August, Sakya Dechen Ling in London, supported by Sakya Thinley Rinchen Ling in Bristol and many other Dechen centres, were delighted to host two days of teachings with His Holiness Sakya Gongma Trichen Rinpoche.

The venue was Chelsea Old Town Hall, an appropriately magnificent Grade II, late Victorian building, right in the heart of the Royal Borough of Kensington and Chelsea. Around 400 people came together for this rare and precious occasion, both from the UK and overseas, and from a host of centres and communities associated with the glorious Sakya tradition, including Sakya Ling in Reading and Sakya Thubten Ling in Bournemouth.

His Holiness opened the teachings by extending a very warm welcome to everyone attending, in particular the khenpos, Lama Jampa Thaye and family, along with all the other Buddhists present. His Holiness has been coming to England since the 1970s, and he remarked that, over the many years that he has visited England, how beautiful the country is and how people are increasingly focused on virtue. He also took the opportunity to describe how Lama Jampa has been his dharma friend for many years – for 50 years in fact – and how impressive it is that he has continued the traditional Tibetan Buddhist studies and practice, and how encouraging it is to see the dharma growing and blossoming everywhere.

As for the teachings themselves, on the first afternoon, His Holiness gave the initiation of Namgyalma, from the lineage of the great master and translator, Bari Lotsawa, featuring nine deities. This goddess is renowned for both rescuing beings from the great suffering of the lower realms in the cycle of birth and death, as well as being one of the three main deities associated with increasing the longevity of practitioners. His Holiness also mentioned that of the four wondrous shrines at Sakya monastery in Tibet, one is dedicated to Namgyalma, whose practice was performed every day, and that when  the shrine was consecrated, the whole place was suffused by a beautiful yellow light. Finally, His Holiness reminded us to keep the wish to achieve buddhahood constantly in mind and encouraged all to recite the mantras when we can, noting that the long mantra is indeed very long!

For the second day, His Holiness gave the five deity initiation of Chandra Vajrapani from the lineage of Rechungpa, one of Milarepa’s greatest disciples, who achieved the rainbow body in that very life. His Holiness began by explaining the different forms of Vajrapani, the embodiment of all the power of the buddhas, before describing the special characteristics of Chandra Vajrapani himself. In his youth, Rechungpa was severely afflicted by a disease caused by powerful semi-divine, serpentine beings called nagas. He travelled to India and received teachings on Vajrapani Chandra from the Indian master Balachandra, to help overcome his sickness and, upon his return, gave the practice to his own disciples, from whom it was transmitted right down to the present day.

His Holiness completed the teachings with a wish that everyone there remain connected so that we can attain enlightenment for the sake of all beings. He also wished everyone success both in worldly and spiritual endeavours. To close, Lama Jampa extended his heartfelt gratitude to His Holiness for coming and giving such precious teachings, themselves enough for a lifetime of practice. He also spoke of how joyful he felt at being able to receive these teachings from such a great master together with so many of our fellow Buddhists. Finally, Lama Jampa described how we are already looking forward to His Holiness gracing us with his presence again soon, both here in England and beyond.

So with that, everyone dispersed, buoyed up by the immense blessings of both the teachings and the presence of His Holiness, and with renewed aspirations to fulfil dharma commitments and practise with energy and sincerity until we meet together again soon.

Below is a link to a photo book of the event, available to purchase from Blurb: 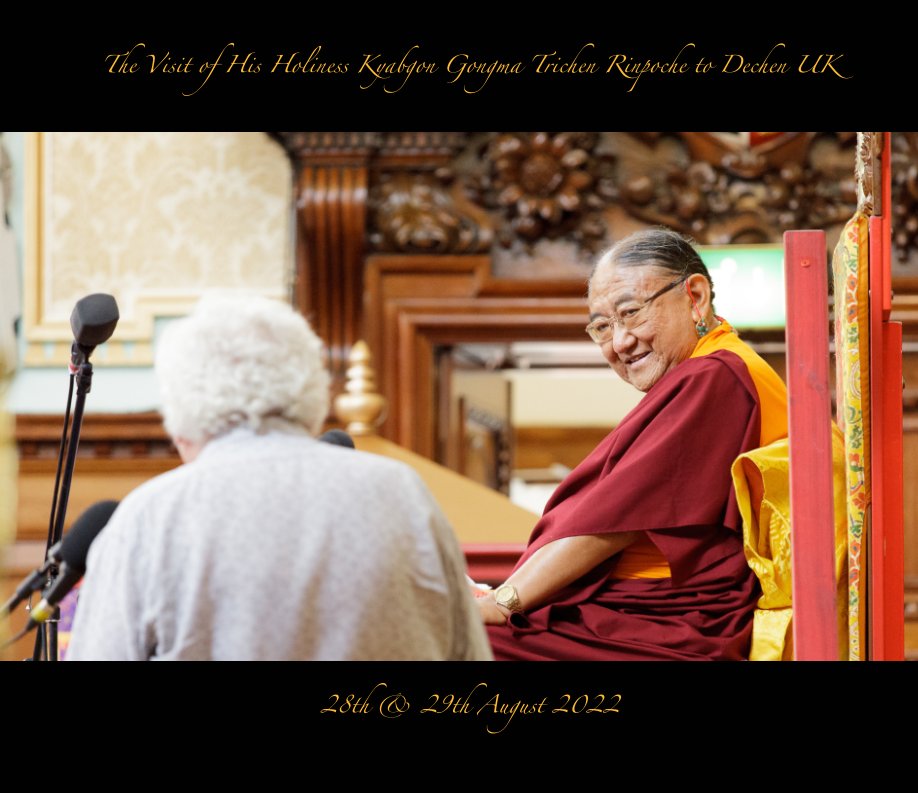 The Visit of HH Sakya Trichen to Dechen London 2022