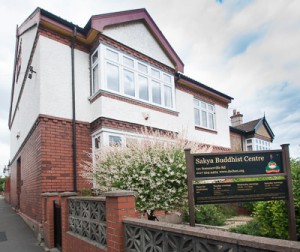 The Sakya Thinley Rinchen Ling Buddhist Centre was the first Buddhist centre in Bristol and also the first centre belonging to the Sakya tradition of Tibetan Buddhism in the UK.

It was founded in 1977 by Lama Jampa Thaye at the request of his teacher, Karma Thinley Rinpoche. Rinpoche named the Centre ‘Thinley Rinchen Ling’, after His Holiness the 41st Sakya Trizin’s grandfather, the 39th Sakya Trizin, Dakshul Thinley Rinchen. Translated into English, the Centre’s name means ‘place of precious Buddha activity’. ‘Sakya Trizin’ means ‘throne-holder’ and refers to the supreme head of the Sakya tradition of Tibetan Buddhism.

Endowed with this rather grand title, Sakya Thinley Rinchen Ling, the Centre began its life in 1977 in a modest basement flat in Clifton, attracting a few local people interested in Buddhism. Now occupying a beautiful, spacious house located opposite St Andrews’ Park, it has introduced a great number of men and women from Bristol and beyond to the Buddhist spiritual path. The Centre houses a traditional Tibetan shrine room which was blessed with a magnificent new life-sized Buddha statue, specially made for us in Nepal in 2015.

Lama Jampa Thaye, the Centre’s spiritual director, teaches frequently at the Centre. Since its inception he has given numerous teachings from the Sakya tradition and is recognised as one of the few Westerners authorised to teach Tibetan Buddhism to the highest level. He has built up a large following of students at the Centre who have received many public and private teachings from him.

For 40 years, the Centre has hosted teachings from some of the most important Tibetan lamas alive today. His Holiness Sakya Trichen, (the 41st Sakya Trizin) has bestowed many profound and powerful teachings to numerous people at the Centre.  His sons, Ratna Vajra Rinpoche, the current and 42nd Sakya Trizin, and Gyana Vajra Rinpoche, eminent lamas in their own right, are also frequent visitors.

Alongside these major teachings by Lama Jampa Thaye and other renowned teachers, the Centre also has a full programme of events, including introductory evenings, study groups, pujas (group meditations) and Tibetan classes.

The Centre is run by volunteers and funded by donations and is administered by Sakya Dechen Buddhism Ltd  registered charity  no: 1163076.

For more details about Dechen in Bristol please visit sakyabristol.org

Sakya Thinley Rinchen Ling Buddhist Centre Bristol is part of Dechen, an international association of centres of the Sakya and Karma Kagyu traditions of Tibetan Buddhism, founded by Lama Jampa Thaye under the spiritual authority of Karma Thinley Rinpoche. There are centres, groups and retreat centres throughout the UK and worldwide offering a range of classes, courses and other activities.