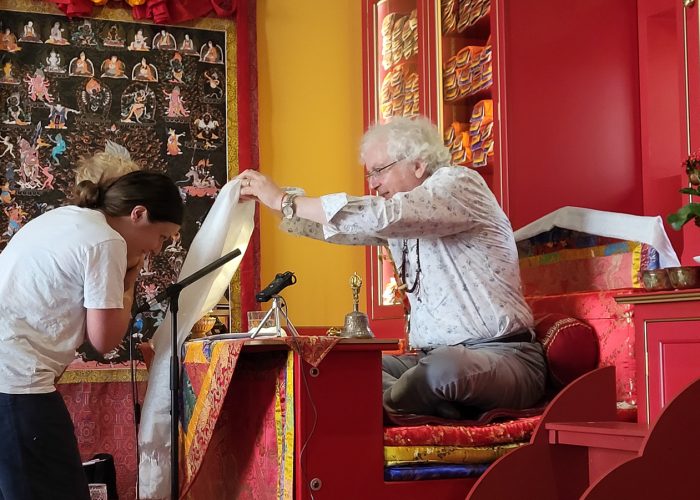 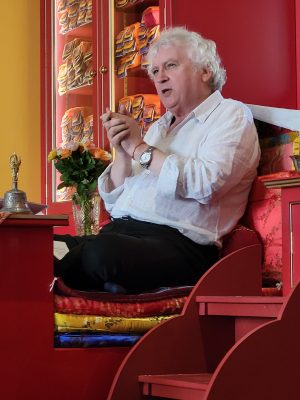 From 17 to 29 July, Lama Jampa led two weeks of teachings and group practice at Dechen’s European retreat centre, Sakya Changlochen Ling. This much-anticipated course was the first major event here since summer 2019. Under blazing blue skies, over 80 people came from far and wide to further their own dharma practice and connect with friends both old and new.

Lama Jampa opened the course with the initiation of Manjushri Arapatsana, a deity renowned for increasing the wisdom of practitioners. This was the ideal way to start this first week of teachings, which featured the extraordinary work on the graduated path to buddhahood by the 11th-century Indian master, Atisha. Entitled ‘The Lamp of the Path to Enlightenment’, Atisha gave this teaching at the request of a Tibetan prince, who wished for a text that brought together all the aspects of the Buddhist path, without omission, whilst being sufficiently short and straightforward to understand. In 68 verses, it describes the three different motivations and goals of the Buddhist path, namely a good rebirth, individual freedom from suffering and, finally, complete enlightenment for the benefit of others, ultimately showing how these aspects form one, systematic path. Given in the context of a country that was internally fragmented and where there was much confusion over what was – and was not – part of the Buddhist path, it enables those encountering Buddhism today to have a sound basis for their study and practice.

The week closed with the initiation of the three deities of Amitayus, Namgyalma and White Tara, whose practice is renowned for increasing longevity to support one’s dharma activities.

In the second week, Lama Jampa gave the initiation of Vajrapani Bhutadamara, along with the reading transmission and instructions for the practice by Zhuchen Tsultrim Rinchen. Students then undertook several days of group practice on this deity, which is renowned for clearing away obstacles to progress along the path, in particular ahead of completing major cycles of practice such as Vajrayogini.

Just as we had all assembled, so then it was time to disperse, reflecting as Lama Jampa stated, that it was so wonderful to come together after the darkness and to have teachings in the presence of the three jewels in such a holy place. We look forward with confidence to further teachings and practice at Changlochen next summer.

You can view more images from this wondrous time in the Perigord Noir via the link below: