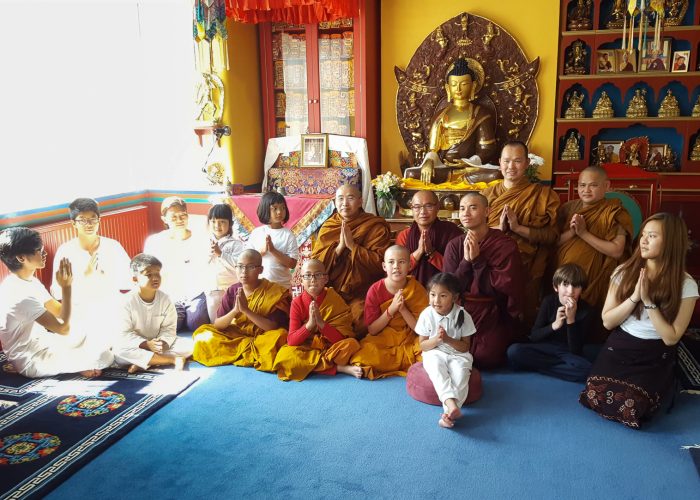 Visit from the Oxford Buddhist Vihara

On Wednesday 31st July the Centre received an unusual visit from members of the Oxford Buddhist Vihara, the home of a group of monks and a meeting point for a community of Buddhists from a variety of backgrounds, centred on the Theravada Buddhism practised in Southern and South-Eastern Asia.

More than twenty monks and lay people, including younger novice monks with temporary ordinations for the Vihara’s summer camp, gathered in the shrine room and were welcomed and introduced to the Sakya Centre by Coordinator David Armstrong, followed by questions and answers. They were then led by Ajahn Dhammasami in the Pali chants of going for refuge to the Three Jewels of Buddha, dharma and sangha, a practice common to Buddhists everywhere. It was a delight to meet the Vihara’s members and spend a little time in their company.

Historically, the Buddha’s Theravada teachings were transmitted from India to the “Southern Buddhist” countries, such as Sri Lanka, Thailand, Myanmar, Laos and Cambodia, while the Mahayana teachings spread widely in places such as China, Korea, Japan, Mongolia and Tibet. It is extraordinary and to see so many teachings from both of these great traditions represented in the present day in the West.