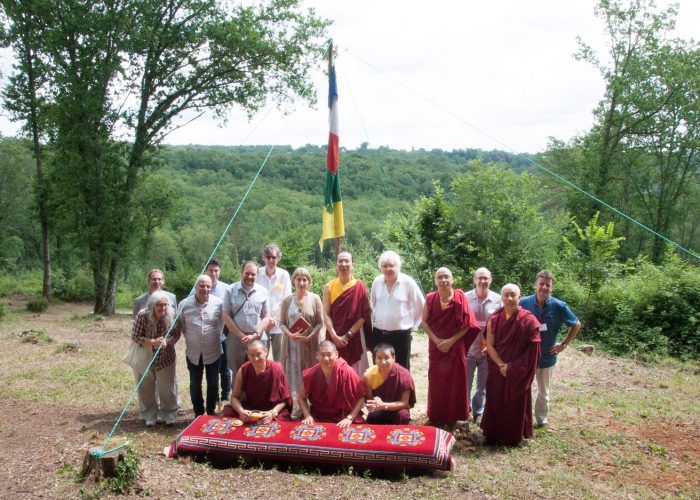 History in the making

On a warm summer’s day this June, an important event happened at the Dechen retreat centre in France which will be remembered for many years and which we hope will be a landmark in the establishment of the teachings of the Buddha in the West.

Tuesday 27th June 2017 saw the historic first visit of the new head of the Sakya tradition of Tibetan Buddhism, His Holiness Ratna Vajra Rinpoche, to Sakya Changlochen Ling, our retreat centre located in the Dordogne region of France.  This was part of the very first teaching tour of His Holiness since his enthronement earlier this year in March, when he succeeded his father as the supreme Head of the Sakya school of Buddhism.

During the visit, His Holiness blessed the Centre and the land, and approved the site for an enlightenment stupa to be constructed in the future.  He also bestowed the Vajrakilaya Torma initiation of the Khon family lineage.  A number of lamas and friends from neighbouring dharma centres attended the event, hosted by Lama Jampa Thaye, at whose invitation Rinpoche agreed to visit.

Lama Jampa has always emphasised that Changlochen is a place where the teachings of the Sakya school are transmitted, studied and practised, and for this reason a visit from the head of the Sakya tradition was a landmark event.

The Sakya school and the Khon family lineage

The Sakya school is one of the four main schools of Tibetan Buddhism (alongside the Nyingma, Kagyu and Gelug).  It takes its name from the monastery founded in 1073 at Sakya (“the place of grey earth”) in south-western Tibet by Konchog Gyalpo, a member of the Khon Family Clan.

The Khon family have been called “the lords of the teachings” [1][2] as they have assiduously practised and passed on the authentic teachings of Buddha from generation to generation in an unbroken family line right up to the present day.  The family has produced many enlightened masters, who have written commentaries on the teachings which we now study as part of the shedra.

It is this noble and historic family that His Holiness Ratna Vajra Rinpoche and his father belong to, and as such they are seen as the living connection to, and embodiment of, the teachings of the Sakya tradition of Buddhism.

In July 2014 we were honoured when H.H. the 41st Sakya Trizin made a visit to Changlochen to bless the land.  This made a profound connection between the Centre and a living throne holder from the Dolma Palace in Sakya, Western Tibet.  As Lama Jampa has said:

“Now the Sakya tradition under the compassionate guidance of His Holiness Sakya Trizin (b.1945), magnificent incarnation of the Khon line, is putting down roots outside Tibet in India, South-East Asia, North America and Europe.” [1]

In fact the Khon family’s involvement with Buddhism goes back even further than 1073, with earlier generations having followed the ancient tradition of Buddhism, Nyingma, which was brought to Tibet in the 8th Century by Guru Padmasambhava.  A member of the family, Khon Nagarakshita, was a close student of Guru Padmasambhava and one of the first ever Tibetans to be ordained as a monk, by the abbot Shantaraksita.

Some of the teachings preserved by the family since this early transmission were the empowerments and meditational practices of Vajrakilaya.  The night before the initiation was given in France this summer, Lama Jampa explained that he had requested this initiation because it was a Khon family initiation of Vajrakilaya, meaning it had been preserved by the family in an unbroken line since the time of Guru Padmasambhava himself all those centuries ago.

After the initiation Lama Jampa, his wife Dechen Dolma and members of the Dechen sangha hosted a traditional English tea party with sandwiches and cake for His Holiness, his entourage and guests from local dharma centres, and it was great to share and enjoy this event with our dharma neighbours and friends.

Just as His Holiness made ready to leave there was a sudden downpour of rain and a clap of thunder, causing us all to rush for the shelter of tents and umbrellas.  An extraordinary end to an extraordinary day.

As we reflected on the event the next day, Dechen students joined Lama Jampa in the wish that this visit would help create the causes and conditions for the flourishing of the Sakya tradition and the dharma for the benefit of people in this Centre, the whole of Europe and beyond for many years to come, and that His Holiness would return very soon.

[1] Chogay Trichen Rinpoche. The History of the Sakya Tradition.  A  Feast for the Minds of the Fortunate. 1983. Bristol: Ganesha Press.